Animation as “mini museums” Behind the scenes

In January 2020 the museum opened the exhibition From Visionaries to Vloggers: media revolutions in the Middle East. All exhibitions combine multiple ways of sharing information, combining physical and digital objects with text, moving and still images, graphics and other interpretive strategies. In combination their purpose is to offer visitors different routes into a subject or discussion, and more choice to engage with the content. As part of the interpretation for this exhibition a suite of animations was commissioned.

Creating animation is a complex process. This exhibition includes nine animations (as each is produced in two languages giving a total of 18 featured in the exhibition), the creation of which entailed a robust exchange of ideas and visual vocabulary between the curatorial team and the creative design studio Cognitive, based on the south coast of England. Once the museum had contracted the company we provided considerable information on the exhibition, its discussions, sub-stories and objectives. This importantly included the purpose of each animation—the educational, emotional and behavioral outcomes we needed the work to fulfil within the stories and discussions. Along with this came information on length of animation (nothing longer than 90 seconds), detailed visual references and initial draft scripts.

Some of the animation introduces the background to a specific medium in the Middle East and Gulf region, for example oral traditions of storytelling, theater or radio. Others discuss aspects of revolution, media balance and accessibility to education. All nine of the animations, in both languages, can be viewed on our Explore Content page, and below you will find some of their ‘story maps’, draft versions of components of the animation.

To better understand the stages of development we asked some of the Cognitive team about their process of working with us on the animations.

__There are a lot of big ideas and visuals in From Visionaries to Vloggers. How did you choose elements to take forward in your initial animation style development?

Dan Stirrup, Senior Creative: The Media Majlis’ brief was our starting point, there was an absolute wealth in terms of visuals provided, in the reference images. However, we always do our own research, in reviewing all this content, we look for a kind of conceptual underpinning—in this case it was the cyclical nature of the subject matter.

Tom Bradshaw, Illustrator: I found it very useful to watch old TV programs that we found on YouTube from the times/areas we were studying. Linking these findings to what was in the scripts really helped us take forward elements for development and planning.

__How much research was required to get the references in the animation right?

Dan Stirrup, Senior Creative: We normally work on concepts from a very western-centric point of view and they’re stories we’re used to hearing.  We’re not used to hearing them from a perspective that was Middle Eastern. It was fascinating to step outside the bubble of our own country’s history and see a whole different array of stories. We had these forms of media we were familiar with interacting with history, events, culture and traditions with which we weren’t familiar.

Suzanne Mills, Senior Creative: At the beginning The Media Majlis gave us direction, telling us in their briefs what they wanted in it. During the research, we were familiarizing ourselves with the content. If we got things wrong the curatorial team was very helpful in confirming what elements meant.

Fran Morton, Illustrator: The research was really interesting, it was probably one of my favorite parts, I learnt so much. I found out about artists and writers that I’d never heard of before. I’d heard of some of the poets that came up but there were a lot of other literary figures I wasn’t aware of. 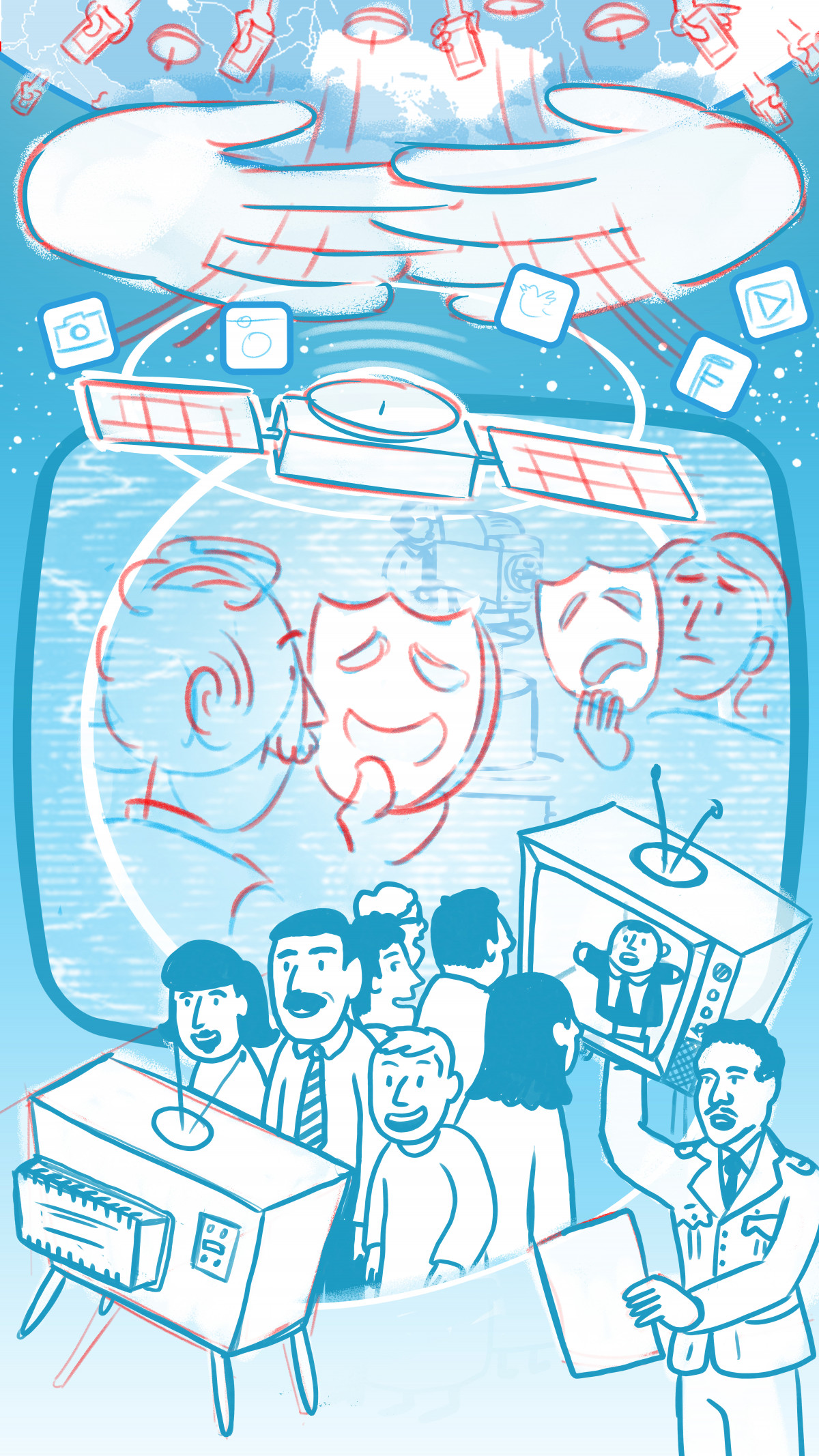 __How does the creative team develop their ideas together in order to take one style direction forward?

Dan Stirrup, Senior Creative: It starts with how we look at something. There were some quite sensitive subjects which needed analogies to present them in a way which truly showed what happened. Rather than saying this is exactly what happened, this is right and this is wrong; it was about saying here are the stories and angles from which to look at. It was about showing the complexity feeding into one situation. Having the images, facts, maps and details gave us a toybox to start playing with. For this project we were almost curating the information. We were composing it, trying to weave it into a flow and pepper it with some creative ideas.

Suzanne Mills, Senior Creative: As far as getting the ideas together, swarms were great to generate the ideas, but it was easier to layout using pen and paper. Even if it was completely literal it would still look like a very interesting animation. The characters and the places created such rich imagery!

__What does it take to get from the ‘blue line’ sketches to the animatics, to the final product?

Dan Stirrup, Senior Creative: Bluelining is like a visual shorthand—you can do a lot with a simple figure to suggest gesture, direction and a sense of dynamic flow without having to render it in a lot of detail. That figure can convey an idea but then become all sorts of different characters when it is presented in the final piece. There’s something quite free about the blueline stages earlier on. You can be a bit more spontaneous and fluid with it. When you get to the ink stage and the final illustrations you really start layering and ordering the assets. There's a real discipline in managing the output you’re producing as well as the creativity.

Suzanne Mills, Senior Creative: The brushes we were using meant the bluelines wouldn’t look the same as the story map. The way the creative process went meant it was better to call those the inks as they were so close to being finished.

Fran Morton, Illustrator: It takes a lot of work; you have to take it one step at a time. Once you get to the point where you’re doing the final illustrations that are going into the animations you have to be thinking about what the animators are going to have to deal with. You have to think about what's the best way to make it easy for them. That could mean things like separating limbs off characters, so the animators can move them. It’s important to consider what is going to be necessary for the next stage at every point.

Jackie Miller, Animator: By the time ‘blue lines’ reach the Animator, we can draw on the sketches to establish the overall message; this sometimes affects the way we approach the animation. The basic movement of an animatic then can inform how the final illustrations might be rendered, we might make some elements more prominent than others or extra content might be needed to fulfil the narrative. This is no guarantee that changes won’t be made later, but it does sow the seed of what our animation will become. 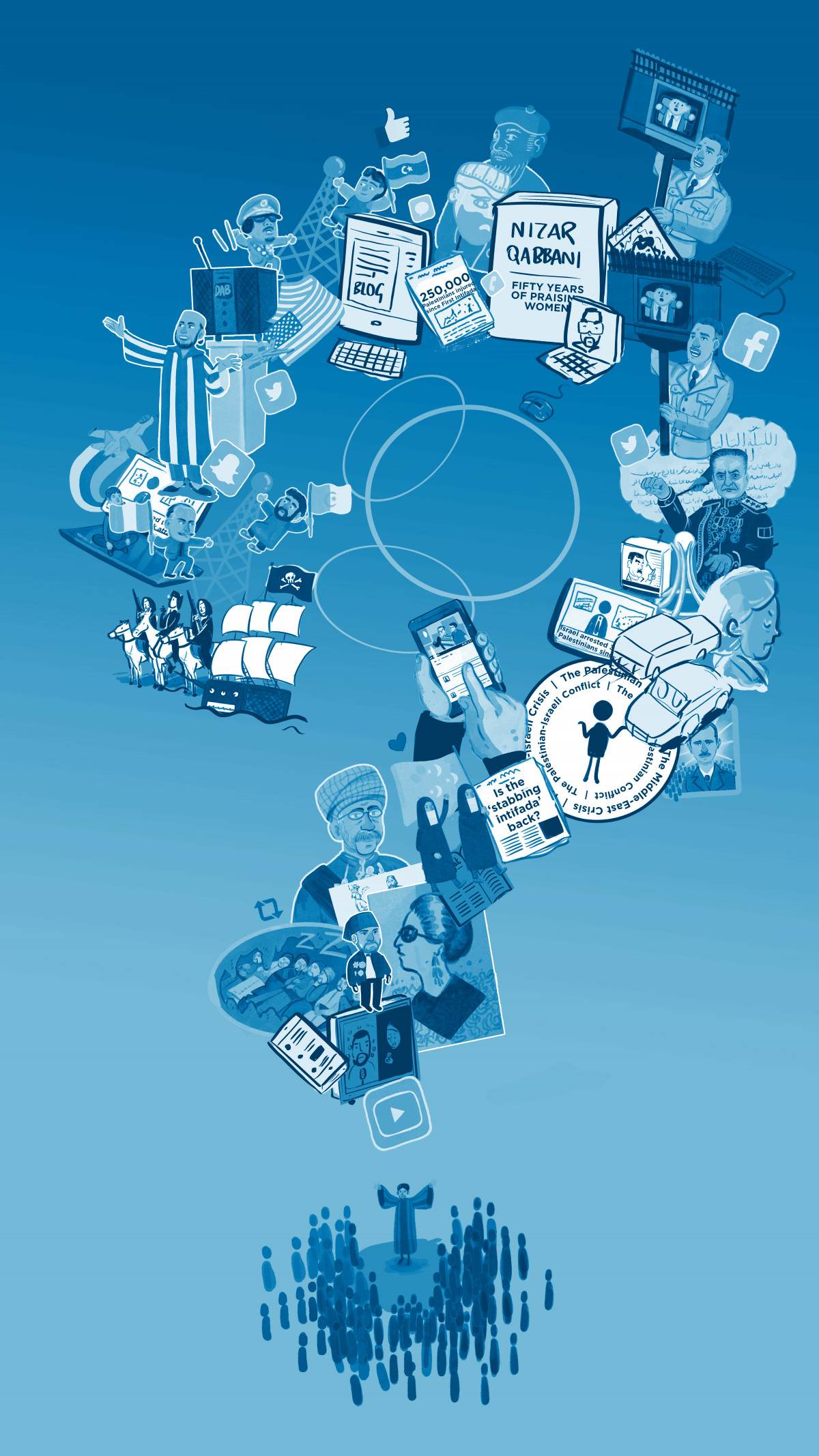 __And finally, why are animations a dynamic way to introduce new information, ideas and concepts to a museum audience?

Dan Stirrup, Senior Creative: There's something very interesting about museums, you wouldn’t stumble on the animation, like you might online. At museums I know the power of a nicely presented screen. It gives you a moment to pause and be pointed towards things. It acts as a guide, a curator who can prep you and prime you for the raft of source materials and exhibits coming your way. These animations are priming people how to think about the way different media manifested themselves in the region. They’re posing questions that invite museum goers to find the answers in the exhibition.

Hannah Goff, Project Manager: We know through research that our animations increase entertainment, understanding and sharing.  It’s the combination of a great script, captivating visual references and eye-catching animation—coming together to make a memorable experience. It's also great that the exhibition is about media and so our animation reflects that.

Suzanne Mills, Senior Creative: When you’re introducing a topic, it’s nice to immerse yourself in the way that watching an animation does. Animations are dynamic, priming and they capture the imagination. They’re introductions to history. It’s a lot more effective to have an animation than a static image.

Dan Stirrup, Senior Creative: In a way I feel like the animations we make are mini museums. Museums are places were you’re taking lots of different sources and putting them together. You’re trying to build a story out of all these component parts, I think that’s what we do with our animations—and we hope the result is a supercharged story.

Fran Morton, Illustrator: Animations are a good way of distilling ideas into an interesting visual that is engaging for people of all ages. I think it’s a good way of introducing ideas in a friendly way. You can use a lot of symbolism in animation, visual shorthand that you couldn’t use in a more typical documentary style.

Tom Bradshaw, Illustrator: Animations catch attention. People love storytelling and one of the best and easiest to digest forms is animation. It requires very minimal reading and is accompanied by a script, allowing the viewer to not just digest the visual information but also the audio at the same time. This gives you a chance to almost feed two different informative points at once in a simple way.

__Visit our Explore Content page to see the animations.

__See our Majlis360 article What exactly is interpretation? to learn more about how animation and other strategies support storytelling and learning in exhibitions. 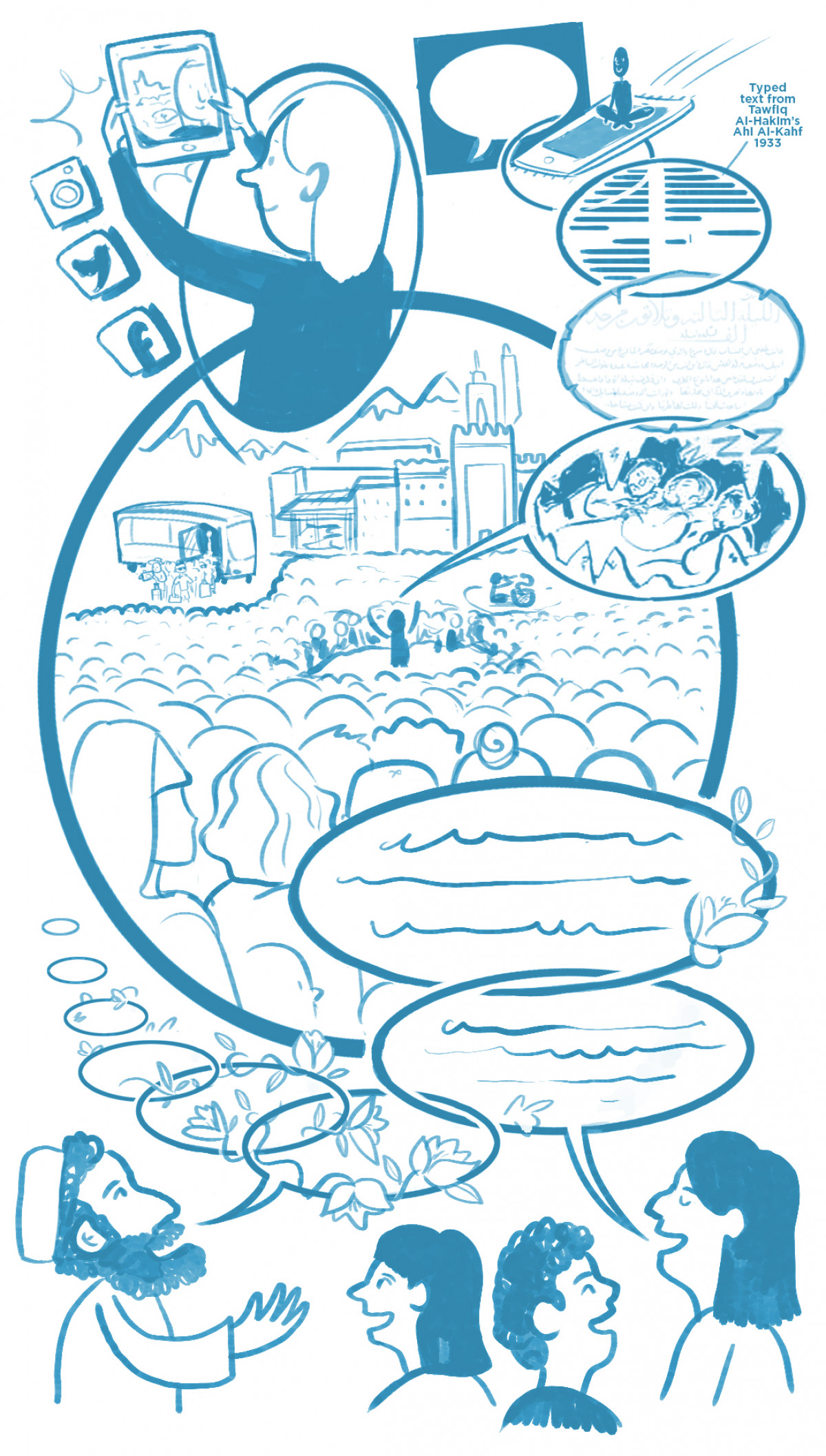 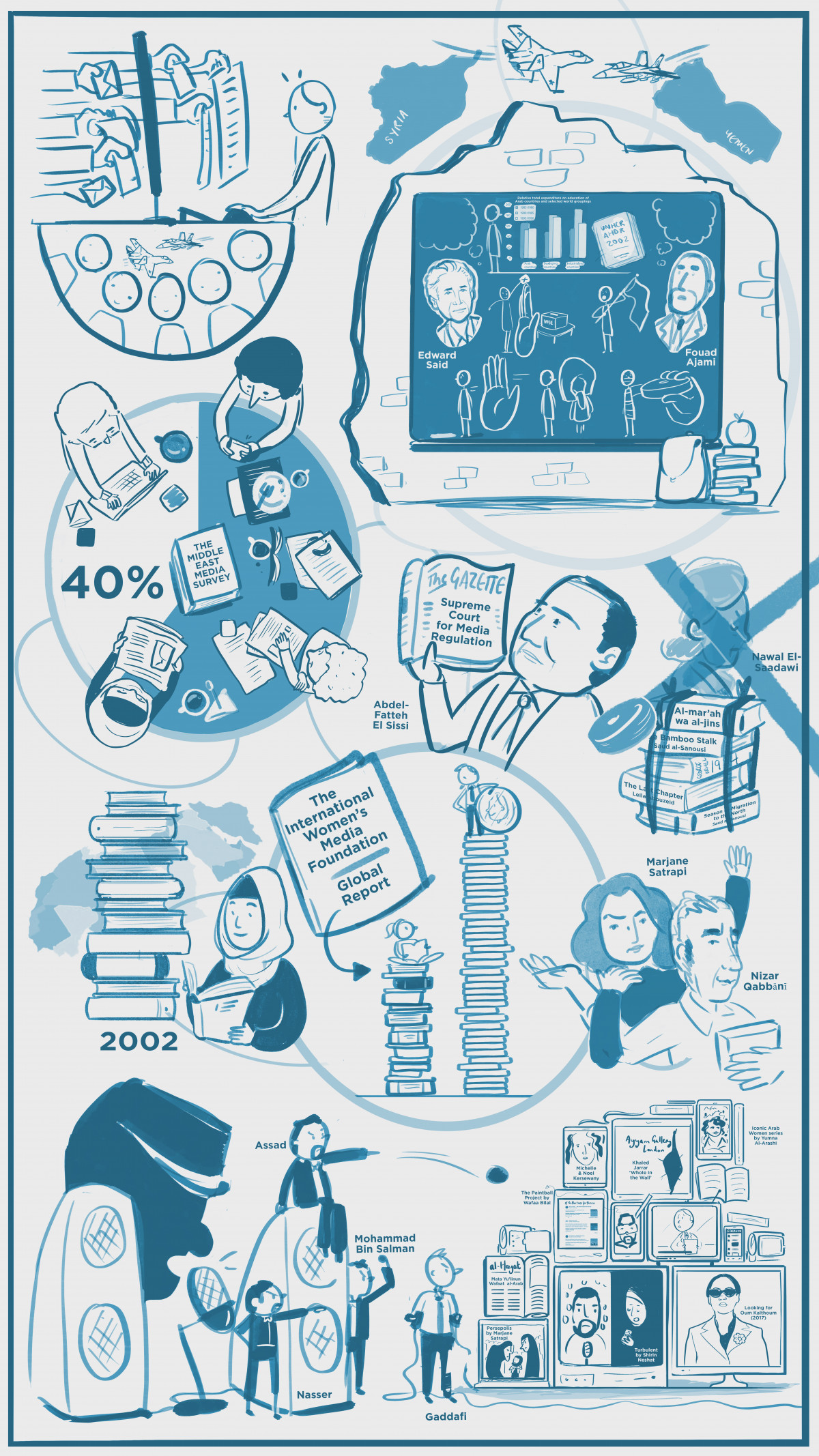 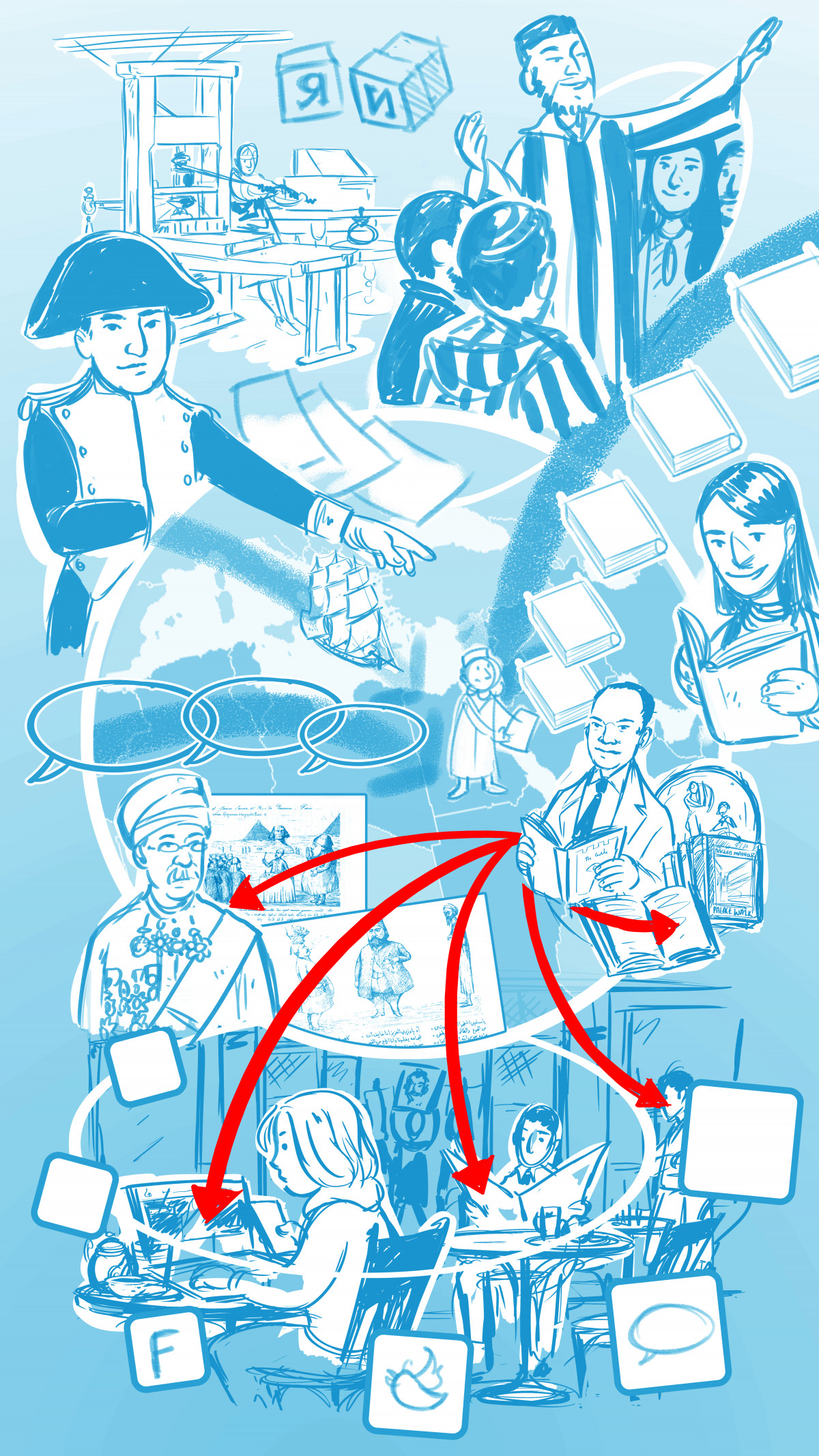 How will The Media Majlis know what difference it has made to audiences?

This is the first of three articles on the museum’s evaluation of its work and exhibitions.

Start exploring unique content from our exhibitions and discover the relationships among them. You can follow paths to uncover new stories or use our search functions to filter content.